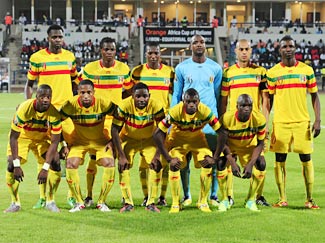 Mali will be making their seventh Africa Cup of Nations finals appearance in Gabon and Equatorial Guinea 2012.

The Eagles have never won the tournament before, though they were runners-up in 1972 after losing 3-2 to Congo-Brazzaville in the final. In 1994, 2002, and 2004 they got as far as the semifinals, but in the last two Nations Cup tournaments they have failed to get out of the group stages.

Frenchman Alain Giresse is the man in charge – he took over in 2010 and oversaw a qualifying campaign in which Mali topped a more-competitive-than-expected group.
The West Africans qualified as winners of Group A, but they only edged ahead of Cape Verde thanks to head-to-head results and were only two points ahead of third-placed Zimbabwe. Any of the three teams could have won the group on the last day of qualifying, but Mali’s 2-2 draw away to Liberia was just enough to see them through.
The Eagles can boast a strong squad of players, most of whom play their club football in France. The standout figure is Barcelona midfielder Seydou Keita, but the likes of Adama Tamboura, Mahamane Traore, Modibo Maiga and Cheick Diabate are not to be underestimated. The goal scoring burden will fall on the latter two following the retirement from international football of Frederic Kanoute.
Mali will not be one of the favourites to win the 2012 AFCON, but having come through a difficult qualifying group they will be battle-hardened and tough to beat. They can also count on some inside knowledge from Giresse, who formerly coached co-hosts Gabon.