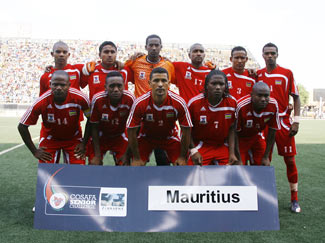 The Indian Ocean Islanders from Mauritius have only ever once qualified for the finals tournament of the Africa Cup of Nations which was way back in 1974 when Egypt hosted the event, by the time Equitorial Guinea and Gabon host the 2012 event it would be 28 years since they were amongst the continents elite teams.

Once again Mauritius have been drawn in a tough and competitive group with difficult away matches against Cameroon, Senegal and the DR Congo few would give them any chance of progression out of this group.

They can take some inspiration out of their COSAFA rivals Botswana’s recent exploits in Qualifying and target an upset or two, in reality things are not going to be easy for the side ranked 177th in the World and coached by Akbar Patel.

It will serve Patel and Mauritius well if he drops the veteran’s and blood’s in younger players so that they can use this qualifying campaign to gain experience which will make them far more competitive in the qualifiers for the 2013 Africa Cup of Nations.