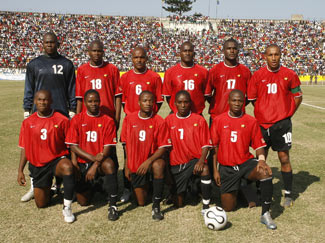 Mozambique have disappointed on the international stage given the talent available in the country, though the fortunes of the side were not helped by a long and bitter cival war that raged from 1977 to 1992.
In fact, the side only entered its first qualification campaign for the Nations Cup in 1982, with the Federação Moçambicana de Futebol having only been affiliated to FIFA two years earlier.
They failed in that attempt, but did win a place at the 1986 finals in the Egypt, losing all three of their group matches without scoring a goal.
It would be another decade before they would appear again, this time in South Africa in 1996, where they lost to Cote d’Ivoire and Ghana, but did manage to gain their first finals point with a 1-1 draw against Tunisia.
Two years later they were back, this time in Burkina Faso, but once again they lost three from three.
They will believe they have a good chance of making it to the 2010 finals in Angola having been drawn in a qualifying group with heavyweights Nigeria and Tunisia, but also Kenya, who The Mambas will feel they should beat.
The side is lead by Dutch coach Mart Nooij, who has been in charge since 2007.