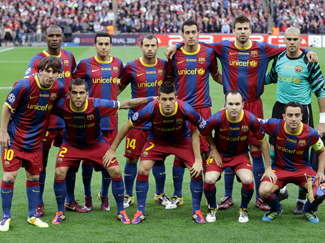 Last season Barcelona finished in second place on the La Liga standings, ending their run of three consecutive titles.
They finished nine points behind leaders Real Madrid who collected a tally of 100 points.
Lionel Messi finished as the league's top scorer with 50 league goals to win the Pichichi Trophy while goalkeeper Victor Valdes won the Zamora Trophy for keeping the most clean sheets.
Barcelona go into the 2012/13 season under the guidance of new coach Tito Vilanova, who served as Pep Guardiola in the past four seasons.
The Catalans have lost key players in Eric Abidal, who underwent a liver transplant as well as Seydou Keita, who left the club to join a Chinese club.
Spanish international Jordi Alba joins the club from Valencia, while striker David Villa is also on his way back after missing the second half of last season due to injury.