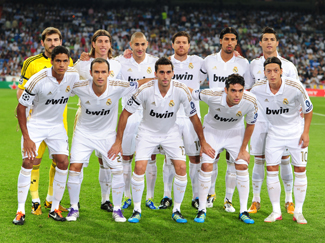 Last season Real Madrid broke a number of records on their way to winning their 32nd La Liga title, and also ended Barcelona's winning streak of three straight titles.
The Whites scored 121 goals in 38 matches, breaking their record of 107 goals which they set during the 1989/90 season.
They also finished the season with 100 points, the highest in a single La Liga campaign, one point more than the previous record which was set by Barcelona during the 2009/10 season.
This will be Jose Mourinho's third season in charge of the Whites having joined them ahead of the 2010/11 season from Inter Milan.
The Portuguese has kept most of his stars from last season including the likes of Cristiano Ronaldo, Karim Benzema, Gonzalo Higuain and Mesut Ozil.