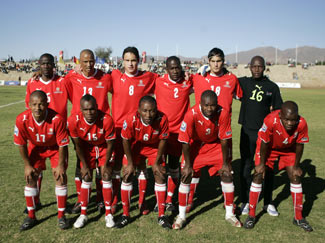 Namibia entered the 2008 Africa Cup of Nations with little outside expectation of them progressing from their tough Group A, but aside from an opening match mauling from Morocco, they acquitted themselves very well.
Coached by Dutch tactician Arie Schans, the side was a mixture of home-based players, a sprinkling of European-based stars, but the majority of the squad played in neighbouring South Africa.
The tournament got off to a poor start after going down 5-1 to Morocco, Soufiane Alloudi getting a hat-trick for the north Africans and Brian Brendell getting the lone goal for the Brave Warriors.
The next match against the hosts Ghana was a much tighter affair and Namibia gave as good as they got, but in the end a lone goal from Junior Agogo was enough to see the Black Stars book their place in the quarterfinals, and consign Namibia to a first round exit.
They raised their game further for the last match against Guinea and secured a good draw, with Brendell again on the scoresheet as he equalised in the last 10 minutes.