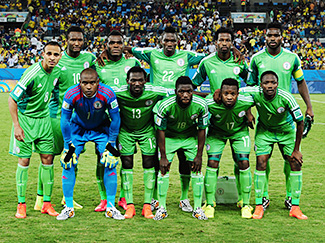 After several near misses, Nigeria finally made their World Cup debut at the 1994 tournament in the United States of America.

Their attractive brand of attacking football won them many admirers at  USA ’94, but inexperience at such a level cost them a chance to reach the last eight of the competition when Italy fought back to draw level with them at the death, before going on to win this Round of 16 clash 2-1.

Nigeria again qualified for the 1998 edition in France and again reached the knockout stage before they were ripped apart by a rampant Denmark 4-1.

The Super Eagles failed to go past the group stage of the World Cup in 2002 after they lost to both Argentina and Sweden before they managed a goalless draw with England.

They returned to the World Cup stage in 2010 after they missed out on the 2006 tournament in Germany.

Again, they were knocked out of the competition by the first hurdle after they lost to Argentina and Greece, and managed a draw with South Korea.Brazil 2014 will be their fifth appearance at the World Cup.