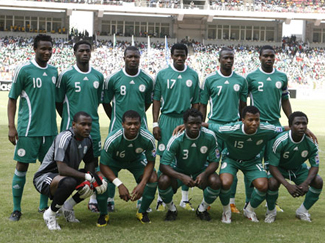 Nigeria have been one of the more successful African nations in World Cup competition since making their debut in the 1994 tournament in the United States.

There they topped their group that also included Argentina, Bulgaria and Greece, and were within one minute of beating eventual finalists Italy in the second round, before Roberto Baggio socred twice to break their hearts.
They repeated that second round appearance at the 1998 World Cup in France, famously beating Spain 3-2 in the group stages, but this time they were comprehensively beaten 4-1 by Denmark in the knockout round.
Their last appearance came in 2002 at Japan/South Korea, but it was a disappointing tournament as they lost to Argentina and Sweden, before drawing with England and bowing out of the competition in the first round. Read more about Nigeria's Group B Opponents