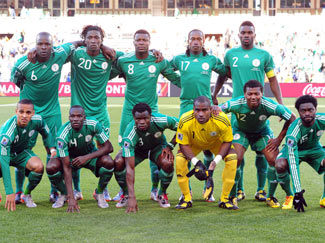 Nigeria have participated in 16 Africa Cup of Nations finals tournaments and will be hoping to make Gabon/Equatorial Guinea 2012 their seventh successive appearance at the continental championships.

The Super Eagles have won the AFCON twice (1980 and 1994) but they can rightly be regarded as the ‘nearly men’ of the competition, having reached the semifinals no less than 13 times and ended as runners-up on four occasions.

The West African giants come into the qualifying campaign for 2012 under something of a cloud after their government threatened to suspend the national team from competition for two years following their first round exit at the 2010 World Cup.

Fortunately President Goodluck Jonathan rescinded the ban and Nigeria will be free to try and earn a spot at the 2012 AFCON.

Their coach is Lars Lagerback, who was at the helm of his native Swedish national team for over a decade before taking up the reins in Nigeria in February, 2010. The 62-year-old will be expected to lead the Super Eagles to a comfortable qualification for Gabon/Equatorial Guinea.