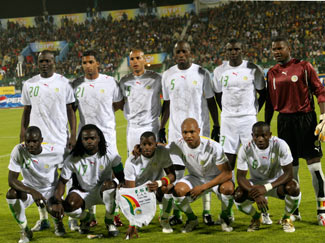 Since reaching the heady heights of getting to the 2002 FIFA World Cup quarterfinals the bottom has dropped out Senegal’s World and have not qualified for the World Cup since, in their last two nations Cup appearances in 2006 and 2008 The Taranga Lions made it to the last four in 2006 and were eliminated at the group stage in 2008.

They failed to progress to the second stage of qualifying for the 2010 event which meant that they were out of the running for a place at the 2010 FIFA World Cup and this sparked a riot in the Senegalese Capital Dakar which resulted in the torching of the football associations headquarters.

Without some of the characters from the past who brought with them indiscipline and unrest to the team such as the temperamental El Hadj Diouf, Senegal can safely set as a target a second place finish behind Cameroon in Group E and can make it to Equatorial Guinea / Gabon as one of the best runners up.

Mamadou Niang the Olympique Marseille striker has had a string of outstanding seasons for his club and he needs to start delivering for the national team as well, the recent performances of striker Papa Waigo who spent the 2009 – 2010 season on loan at Southampton in the English first division which has made him a target of a number of teams in Italy will be a shot in the arm for them as well.