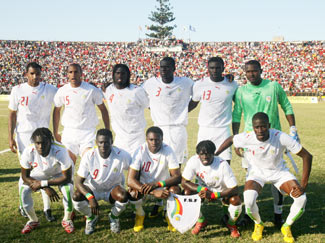 Senegal have been among the powerhouses of African football for over a decade, but the national team, known as the Lions of Teranga, have been struggling recently, failing to reach the 2010 World or African Cup finals after finishing behind Gambia and Algeria in the initial qualifying stage.

This has seen Senegal slip down the FIFA rankings to 89th position – at one stage they were as high as 26th place.
Senegal’s crowing glory came at the 2002 World Cup, when they beat champions France 1-0 in the opening game, a victory made even more sweet by the fact that many Senegalese-born players (including Patrick Viera, who played in that game), have gone on to represent France.

In 2002, Senegal went all the way to the last eight, a feat also achieved by Cameroon and the best an African side has ever done in a World Cup. That, however, is the first and last time that Senegal have played in the finals.

Of the squad that did duty in the finals, the likes of El Hadji Diouf, Papa Bouba Diop, Amdy Faye, Habib Beye, Henri Camara (Senegal’s most capped and highest goal-scorer to date) and Salif Diou went on to become household names and earned moves to the English Premiership.

Senegal have had relative success in the African Cup of Nations, having participated 11 times. Their best finish was in 2002, when they lost on penalties to Cameroon in the final. They also finished fourth in 1965, 1990 and 2006. Nearly all of the Senegalese national team players ply their trade in the major European leagues, although there is a Premier League in existence in Senegal. This has been in operation since 1966 and the most successful clubs have been ASC Diaraf and ASC Jeanne d'Arc, who have both won 10 titles.