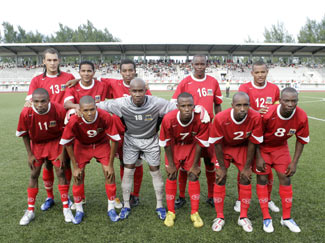 With a population of less than 100 000 people, (and only 2000 registered players and 20 clubs), The Seychelles can certainly be counted amongst the minnows of African football.

‘The Pirates’ are currently ranked 180th on the FIFA list, and have never obtained a better ranking than 129th, since making their international debut back in 1974, when they lost 2-0 to Réunion.
The island country has never qualified for a major international tournament and it was no different ahead of the 2010 World and African Cup qualifiers as they failed to earn a single point, finishing last in a group that contained Burkina Faso, Tunisia and Burundi. Their top goal scorer in the campaign was Philip Zialor, with two strikes.
The international squad all play their football exclusively in the Seychelles league. The league comprises of eight clubs, who are split into two sections – a Championship play off division and a Relegation Play-Off division) after the completion of the round-robin matches.

Current champions are La Passe, while Saint Louis FC have won the most titles (13) since the league was established in 1979.