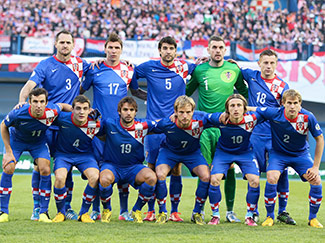 Croatia return to the FIFA World Cup finals after missing out on the 2010 tournament in South Africa.

Prior to 1994 they competed as part of the old Yugoslavia, with France 1998 their first showing after independence.

And what a showing it was as the side stunned the world to finish third in the tournament, their best result to date.

They also reached the 2002 and 2006 finals, but exited in the group stages, unable to recapture that magic from the tournament in France.

The current side looked on course for automatic qualification for Brazil 2014, but took just a single point from their last four qualifiers and scraped into the playoffs.

They axed coach Igor Štimac at that point, replacing him, at first temporarily,  with former international Niko Kovač, one of the stars of the 1998 finals, who was elevated from the Under-21 side. He is assisted by his brother Robert.

Croatia defeated Iceland 2-0 on aggregate in the playoffs to reach the finals in Brazil and Kovač was handed a two-year deal until 2016.