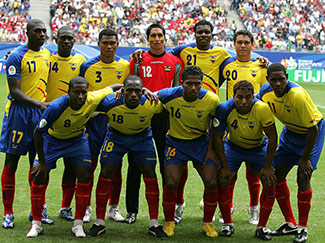 The World Cup in Brazil will be Ecuador’s first since 2006 were they reached the Round of 16 before being knocked out by England.
Next year’s World Cup appearance will be La Tri’s third appearance at the World Cup finals.
Ecuador qualified for next year’s showpiece event by placing fourth in the South American qualifiers with 25 points and a better goal difference than Uruguay.
La Tri are coached by Reinaldo Rueda Rivera who formally coached Colombia and Honduras.
Manchester United winger and Ecuador captain Antonio Valencia will carry the hopes of a nation on his shoulders.