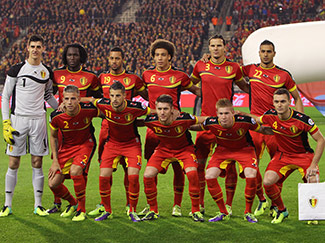 Belgium will be making their 12th appearance at a FIFA World Cup in 2014 and their first since the 2002 tournament in South Korea/Japan.
The ‘Red Devils’ were amongst the 13 teams who participated in the inaugural World Cup in Uruguay in 1930 and their best performance is a fourth-place finish in 1986.
The present crop of Belgian players is referred to as a ‘Golden Generation’ and boasts such talent as Vincent Kompany, Marouane Fellaini, Christian Benteke, Romelu Lukaku and Eden Hazard amongst others.
They are coached by former national team legend Marc Wilmots and qualified for the 2014 finals by finishing top of Group A ahead of Croatia and Serbia in the UEFA zone.
Though Belgium have never won a major international tournament and have often lived in the shadow of neighbours and rivals the Netherlands, they head to Brazil 2014 as one of the top seeds due to their impressive form in recent years and the depth of talent at their disposal.