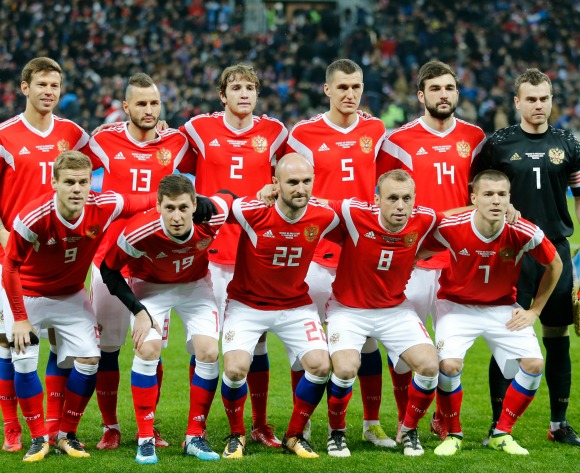 The hosts will be hoping to draw inspiration from the likes of South Korea and Sweden who in the past exceeded expectations when welcoming the world.


Many will feel, though, that the 2018 FIFA World Cup organizers will be lucky to escape the group stages as they aim to avoid the fate suffered by South Africa when they welcomed the world in 2010.


Igor Akinfeev and Yuri Zhirkov are among the final crop of players that reached the final four of the 2008 UEFA European Championships, with the World Cup on home soil coming a decade or so late for the likes of Sergei Ignashevich, Andrey Arshavin, Sergei Semak and Roman Pavlyuchenko.


In Roman Neustädter, Aleksandr Golovin and Artem Dzyuba, head coach Stanislav Cherchesov has a number of notable and talented players to call upon, but they will need to up their game if they are to appease their home fans - especially following a group stage exit in the 2017 FIFA Confederations Cup.


Russia suffered first round exits in all three of their previous appearances at the World Cup (1994, 2002 & 2014) - they qualified for seven further global showpieces as the Soviet Union, finishing in fourth place at England 1966.


Cherchesov will be hopeful that 3-3 draws against Belgium and Spain in recent times will serve as some sort of morale boost for his troops, as Russia prepare to welcome the world.