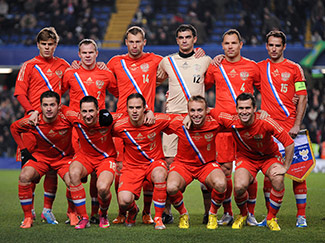 As part of the Soviet Union, Russia qualified seven times for the World Cup from 1958 to 1990, with their best record being a fourth-place finish in 1996.

The team is coached by Italian coach Fabio Capello since July 2012 and captained by Dynamo Moscow midfielder Igor Denisov.

They finished first in Group F ahead of Portugal, Israel, Azerbaijan, Northern Ireland and Luxembourg to book their spot for the 2014 FIFA World Cup in Brazil, winning seven, drawing one and losing two of their qualifiers.