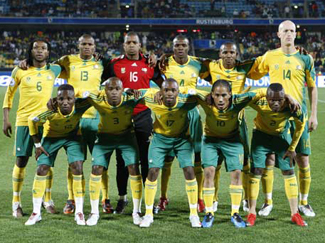 South Africa failed in their attempt to qualify for the 1994 World Cup in the USA, their first attempt at reaching the showpiece finals after Apartheid had robbed previous generations of doing so. They sealed their place at the 1998 event in France however, and did not give a bad showing for debutants.
They lost 3-0 to eventual champions France in their first game, but then drew 1-1 with Denmark and 2-2 with Saudi Arabia when they were arguably the better side in both matches, just a lack experience at the highest level costing them dear.
They once again made it to the 2002 event in Japan and South Korea, where they performed even better, but still failed to make it past the first round. They drew 2-2 with Paraguay in their opener and then got a first-ever finals win as they overcame Slovenia 1-0.
They followed that up with a 3-2 defeat to Spain, which meant they exited the competition on goal-difference as a late goal in the other game between Paraguay and Slovenia meant the South Americans progressed.
Read more about South Africa's Group A Opponents:
France  |  Mexico  |   Uruguay