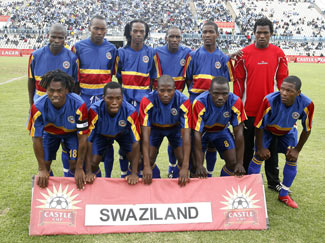 Known by the nickname ‘Sihlangu Semnikati’ (King’s Shield), Swaziland have never qualified for either the FIFA World Cup or CAF Africa Cup of Nations.

Traditionally regarded as one of the weakest teams on the continent, Swaziland’s best performance in a tournament was semifinal appearances in the regional COSAFA Cup in 1999, 2002 and 2003.

Their attempt to qualify for the 2013 AFCON ended without a ball being kicked as they withdrew from the preliminary round before they had the chance to face fellow minnows Seychelles.

They are coached by local Harris Bulunga, who took over from Belgian Valere Billen in 2013.