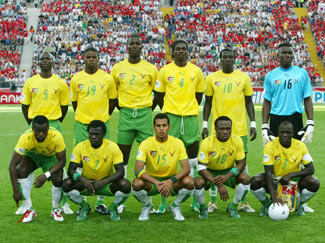 Togo were surprise qualifiers for the 2006 World Cup in Germany and although they failed to win a match, they were not disgraced, despite a pay dispute that threatened to disrupt their campaign.
Things have not gone all that well since as they failed to reach the 2008 Nations Cup finals in Ghana.

There is a definite over-reliance on the form of star striker Emmanuel Adebayor and if he is not firing, the side struggle to make an impact.
They are coached by former Belgian international Jean Thissen, who was previously in charge of Gabon, and play their home games in neighbouring Ghana due their home Stade de Kégué receiving an indefinite ban from CAF after Malian players and fans were injured in violence after a 2007 Nations Cup qualifier.
Their Nations Cup finals appearances were few and far between until the last decade or so, having first qualified in 1972, then 1984, but having to wait until 1998 for the next showing.
They have never made it past the first round though, winning just two of their 18 finals matches.