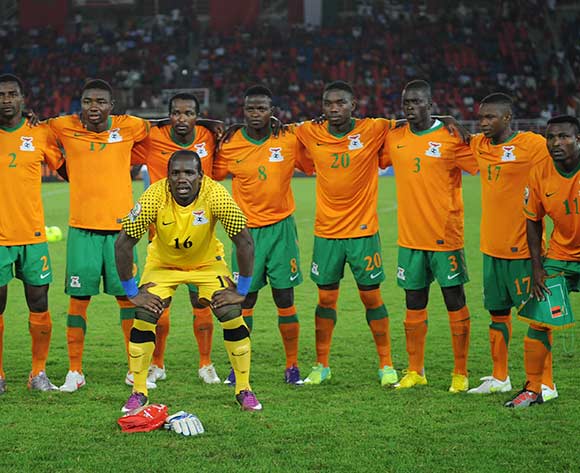 The African champions head to the South Africa-hosted Afcon tournament next year hoping to emulate Ghana, Egypt and Cameroon and retain their title.
Zambia, like the other sixteen 2012 Africa Nations Cup finalists, enjoyed first and second round byes for the 2013 qualifiers.
However, Zambia found their work cut out for them before ensuring their 16th tournament appearance and fifth successive outing.
Zambia, silver medalists in 1974 and 1994, managed to beat Uganda 1-0 in the first leg at home in Ndola on September 8, but lost 1-0 on October 13 in Kampala to force a post-match penalties decider that they won via a dramatic 9-8  shootout.
Captain and striker Christopher Katongo of Henan Jianye in China will be the defending champions’ key man in January.
Katongo is currently Zambia's international top scorer this year on five goals.
However, midfielder Rainford Kalaba of TP Mazembe in DR Congo is proving to be the team’s driving force as evident when he was absent in their stuttering display away to Uganda in the return leg that he missed due to a groin injury.
Meanwhile, this will be Zambia’s French-born coach Herve Renard's third successive Africa Cup with Zambia after a quarterfinal placing in 2010 and gold in 2012.
Tournament Review:
Nothing went according to script for Herve Renard and Zambia at the 2013 Africa Cup of Nations in South Africa.

The 2012 champions exited in the preliminary round on three points from as many games to end a 20-year record previously held by Algeria who bowed on one point after failing to defend their crown in 1992.

Zambia struggled throughout their brief stay but the first signs of things to come came in their five build-up matches in which they drew two and lost three games.

They scored just one goal in the friendly’s in a 2-1 away defeat against Saudi Arabia on December 5 but coach Herve Renard remained defiant that Zambia would peak by game one against Ethiopia on January 21. The opposite happened when Zambia drew 1-1 against Ethiopia in a game they survived a Saladin Said penalty that was saved by Mweene before Collins Mbesuma gave them the lead.

However, Zambia still managed to collapse against a 10-man Ethiopia who outplayed them before finishing level.

Another stuttering display came against Nigeria in which Zambia escaped with a dubious late penalty converted by Mweene see to them get out of jail and share the points.

And against Burkina Faso, Zambia played all the football but were toothless in front of goal.

Overall, goalkeeper Kennedy Mweene was by far Zambia’s best player saving a penalty and converting one.

Christopher Katongo and Emmanuel Mayuka who scored three goals each at the 2012 event exited on disappointing and barren note in South Africa.

Mbesuma's goal was Zambia's only goal in open play in what was his best outing from four campaigns since making his debut in 2006.

Meanwhile, midfielder Rainford Kalaba who had a modest outing by his own high standards remained upbeat that Zambia could bounce back from their embarrassing preliminary round exit and forge ahead in the 2014 FIFA World Cup qualifiers where they lead Group D on six points.

“We just have to go back home and refresh and get back to Earth. That is football we are not the first team to be eliminated so just have to forget and move forward,” Kalaba said.