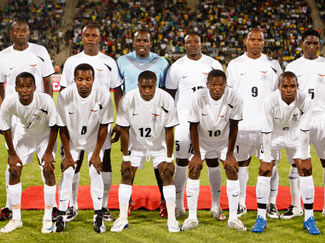 Zambia goes into their 2012 African Nations Cup qualifiers having only missed qualification once in their last eleven attempts since 1990.

The last time they failed to qualify for the competition came in 2004 and that was a real stain on their national football heritage as the Copper Bullets have a rich history in the tournament and often pride themselves on reaching the continental showpiece.

Still, despite the regular appearance in the competition only once in their last six appearances have they made it out of the group stages. That triumph coming in the last edition of the African competition.

Nonetheless, the 2010 event saw Zambia really struggle as they only barely scraped through the group stages with one win, one draw and one loss. The Copper bullets were eventually dumped from the tournament after losing a penalty shoot-out in the quarterfinals against Nigeria.

Zambia’s most successful stint in the Nations Cup saw them as runners-up in the 1974 competition, losing in the final to Zaire after a replay, and followed that up with another runners-up finish in 1994, the year after a tragic plane crash had killed 18 members of the playing squad.