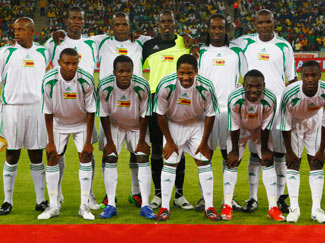 Zimbabwe participated in back-to-back Africa Cup of Nations tournaments in Tunisia 2004 and Egypt 2006, their only AFCON appearances to date. On both occasions the Warriors were eliminated in the group phase.

Zimbabwe have never struggled to produce talented players, with a large number of them featuring strongly in South Africa’s domestic leagues, but the Warriors haven’t quite made the step up to become regular contenders in AFCON and World Cup qualification.

This time around they will fancy their chances of securing a place at the tournament: the Warriors would regards themselves as superior to Liberia and Cape Verde, while Mali sometimes struggles to mesh as a team, despite the impressive talent at their disposal, and the Southern Africans could take advantage of this.

One major stumbling block for Zimbabwe is the issue of coaching. At the time of writing, Norman Mapenza was in charge of the national team on a caretaker basis after Sunday Chidzambwa quit the manager’s post to take up a job with Free State Stars in South Africa.