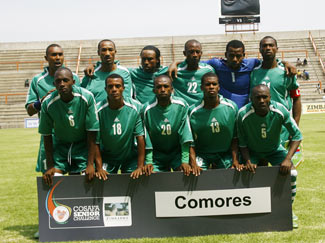 Comoros only made their first entry into the qualifiers for the Africa Cup of Nations for the 2010 finals in Angola, but have failed to qualify since.

The tiny Indian Ocean island have been playing international football since 1979, but cash problems mean they struggle to compete on a regular basis.

For the second tournament running they will not feature at the regional COSAFA Cup tournament with the costs of competing too prohibitive.

The current side is coached by Ali Mbaé Camara and play their home games at the Stade Said Mohamed Cheikh in Mitsamiouli.