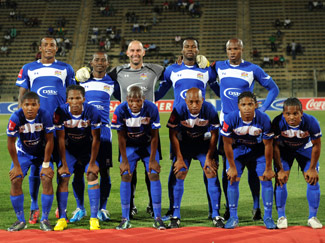 Up until the end of last season, SuperSport United had battled to marry their great recent League success with wins in cup competitions.
But coach Gavin Hunt will hope that their Nedbank Cup victory in May is the spur for better things and his side will be among the favourites to lift the 2012 MTN8.
Matsatsantsa appeared in three finals in a row between 2004 and 2006, but won just one of those – against Kaizer Chiefs in the first year.
After that they suffered defeats to Bloemfontein Celtic and Chiefs, both by slender 1-0 margins, and their best showings since have been the semifinals in 2008 and 2009.
Last year they were thumped 5-2 by Ajax Cape Town in the quarterfinals, their heaviest defeat in the competition in recent years.
United have lost Morgan Gould to Kaizer Chiefs and Tebogo Langerman to Mamelodi Sundowns, while Glen Salmon has retired and veteran Botswana international Dipsy Selolwane has been released.
Hunt has bolstered the squad with Bevan Fransman, signed from Hapoel Tel Aviv in Israel, and Zambian international Clifford Mulenga from Bloemfontein Celtic.