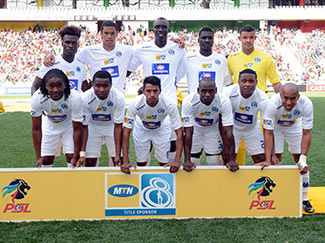 Last year’s losing finalists, SuperSport United qualified for the 2013 MTN8 after finishing the 2012/2013 Premier Soccer League campaign in sixth position on the log.
As a result Matsatsantsa will face Soweto giants Orlando Pirates in the first round of fixtures. SuperSport beat the Buccaneers 3-0 over two leagues on their way to the final last year.
SuperSport United have only ever won the tournament on one occasion, back in 2004 when the competition was still sponsored by South African Airlines.
The competition will be new coach Cavin Johnson’s first chance at silverware while in charge of the Tshwane outfit.
Johnson guided Platinum Stars to a second spot finish in last season’s PSL as well as a semifinal loss to SuperSport United in the Nedbank Cup.
New signings Mame Niang, Thuso Phala, David Mathebula, Bennett Chenene, Innocent Mkhabela and Sibusiso Khumalo will be hoping to get their life at SuperSport off to a winning start with victory in the MTN8.